WEAVING WATER: The Aesthetics of Rivers 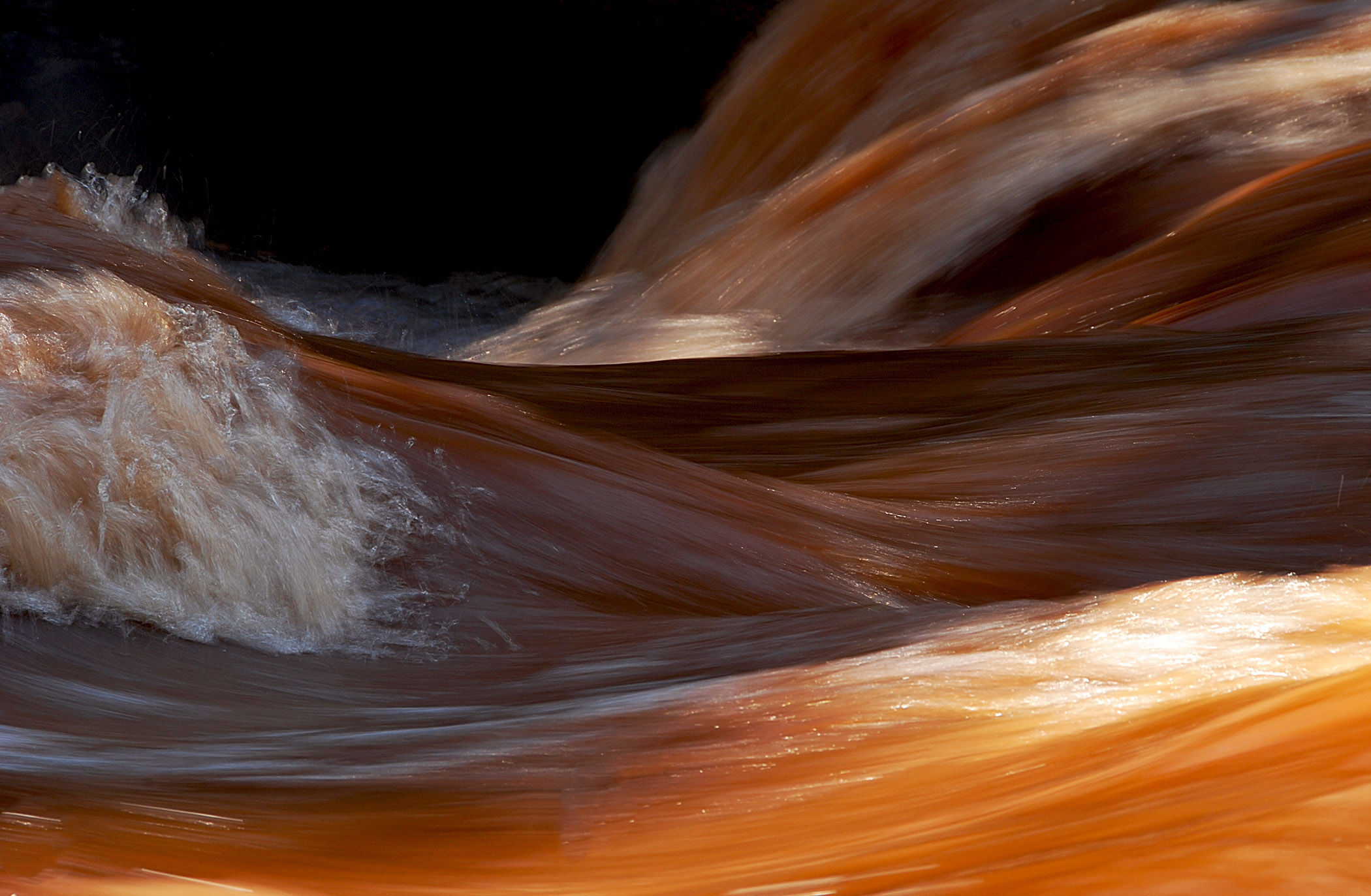 The light in the canyon at this hour makes the river flow like braided strands of the morning sky. It is early, too early, and I am up and sitting at the edge of the river watching. Behind me, the canoes are pulled far up on shore and turned over; in the dim light they look like a pair of drift logs stranded by last night’s high water. Near the ashes of our campfire, my paddling partners are still sleeping. One sleeping bag lies empty, hardly wrinkled. Mine.

I don’t know why I am up so early. If one of the others were to come up behind me suddenly, I’d have a hard time explaining what I am doing here all alone. It is partly nerves, I guess. I have been at least a little nervous before every rapid I’ve paddled in decades of river running. There is always an element of chance in whitewater. Rock and water are unpredictable elements.

I’ve paddled scores of rapids – from the West to Alaska to Wisconsin, even in other countries. Rapids with names that themselves could make for more than one sleepless night – Skull, Hell’s-Half-Mile, Satan’s Gut, Lava, Snaggletooth, Widowmaker. I’ve watched as a seemingly simple Class II rapid in the Brooks Range of Alaska suddenly jumped a few notches on the international whitewater scale when a grizzly charged our boats in mid-stream. There have been rapids in China too remote to have names or be on the maps. Each time, there is that flutter, even if just for a moment, in the pit of my stomach, a recognition of the fallacy of immortality and a gesture of respect for the unfathomable power inherent in moving water.

But it is more than fear that has me out of bed so early in the morning. There is an endless fascination in flowing water that is never lost, like watching the flames in a campfire. Each time is new. Glance away, and it changes. Look back, it is different. That is part of both the beauty of rapids and the excitement of running them. You never run the same rapid twice no matter how many times you’ve paddled that river.

Just to be up early, alone and watching the river flowing is settling to me. My mind drifts and swirls in eddies of time spent on other rivers – a solo trip in the Arctic paddling rivers beneath the midnight sun, running a canyon of the Colorado River under a full moon, a honeymoon spent paddling among the black bear and moose on a river in Manitoba.

Rivers, it seems, have long flowed through my life. The town I grew up in had a river that split the town in two. Long before I knew what a J-stroke was or could pronounce river names like Tatshenshini, I saw the way light reflected off the water. Through the windows of my high school classroom I could see a stretch of that river – just a dirty industrial flowage but moving water just the same – and I’d watch the angle of the sun change across its face through the school day. I came to think of rivers as weavers, weavers of light and time.

Through hundreds of miles of whitewater on rivers located in places that were just answers on a geography test back then, I have always thought of rivers that way. Though it might be hard to explain to some of the people still sleeping back up next to the campfire, I have come down to the river early in the morning to just sit and watch the river weave the strands of another morning together like a tapestry.

It is a personal thing. Whitewater paddling is a personal sport. Boatman Kim Crumbo once wrote, “Boaters confronted with a vigorous rapid have at least four options. The first, most tempting alternative involves burning the boat and walking out.” It is the pressure of the decision – to portage, line, run it, or burn the boats – that brings out the individuality in paddlers.

Sit long enough at the edge of a scouting trail at any major drop and you’ll see an entire spectrum of whitewater personalities. Some paddlers hop around on every rock like buzzards in a thunderstorm, having to see every wave from every angle before deciding on a route and then checking it again to be sure. Others pick a high spot and sit with their eyes closed meditating their way through the waves. Some never get out of the boat, claiming that it is bad luck to see a rapid before running it.

There is a whole culture of rituals that surrounds the paddling of whitewater. Some people kiss Tiger Wall three times as they drift by on the Yampa River to ensure a good run of Warm Springs downstream. Some toss coins on Vulcan’s Anvil mid-river just upstream of Lava Falls on the Grand Canyon. People have their lucky paddles. Some tie the same knots the same way in the same order before each run. One boater I knew never would allow himself to be the odd-numbered boat through a rapid – second, fourth, that was fine, but never an odd-number in line.

It is all ritual. You can take it or leave it but who is to say what rites and gestures trigger the benevolence or ire of the river gods? Each of us has our own debts to pay and our own way of making good on them.

Whatever the system, it is all left at the shoreline. When the current catches the bow, as the boat leaves the eddy, it is best to have your affairs in order. Running a rapid is a one-shot affair, the muzzle-loader of outdoor sports. In fly-fishing, if you don’t like the cast, you can reel in and try another. In rock climbing, if one line plays out, you can rappel down and look for a new one.

There is no reeling in a canoe, no reloading. There is a point in every rapid where all the hype, all the ritual, falls away. It is somewhere just at the edge of the tongue, that slick v-shaped spot at the head of a rapid where the smooth water above begins dancing with the coiled waters below. Upstream of that, things can seem to move agonizingly slow.  Big rapids back up so much water that you wonder if the river has somehow stopped. You wonder if you remembered to tie down all the river bags. And there is the thought that you might still be able to change your mind, catch an eddy, and forget the whole thing.

Downstream, in the heart of the rapid, you will hardly have time to think. But there is that one spot, just before the boat slides down the first chute, that one moment that seems suspended in time. Then, you feel the earth turn and you are committed. You are in it: whitewater.

Once inside a rapid, things happen fast, too fast. Boater’s call Lava Falls in the Grand Canyon “the most exciting 12 seconds of your life.” I’ve always wished there was a way to slow it down, to be able to sit and watch, as slow as a mountain range rising, the building of a wave and its break, the weaving of the waters. You can sit and watch a river all day from shore, but with your feet on solid ground it is a two-dimensional show. On the river, with the waves crashing all around you, it is like being inside of a diamond.

And just as suddenly, you are out. Downstream, you notice your heart is still racing and your fists still clenched. You look back upstream over your shoulder and relive the run for the first of what will be hundreds of times through the rest of your life. The river has woven its way into your soul.

The sun is up now. There is movement in camp. People are pulling on wet suits and paddling jackets. From behind me, I hear footsteps on the rocks. It is my paddling partner.

“What are you doing?” he asks, perceiving that I’ve been here a while.

I look at him and then back at the river. The light has changed and the water seems sharp-edged, more restless than it did at dawn. The river has changed again.

“Just watching,” I say softly and then quickly change the subject.

“You ready to paddling this thing?” I ask.

“Ready as I’ll ever be,” comes the reply, his own ritual before every rapid.

We turn and walk upstream to where the canoes are already being lifted into the water creating ripples of their own, like small threads that flow out towards the current, merge with the waves, and disappear downstream.