On Assignment: A Glacier, a Legend, and a Hummingbird 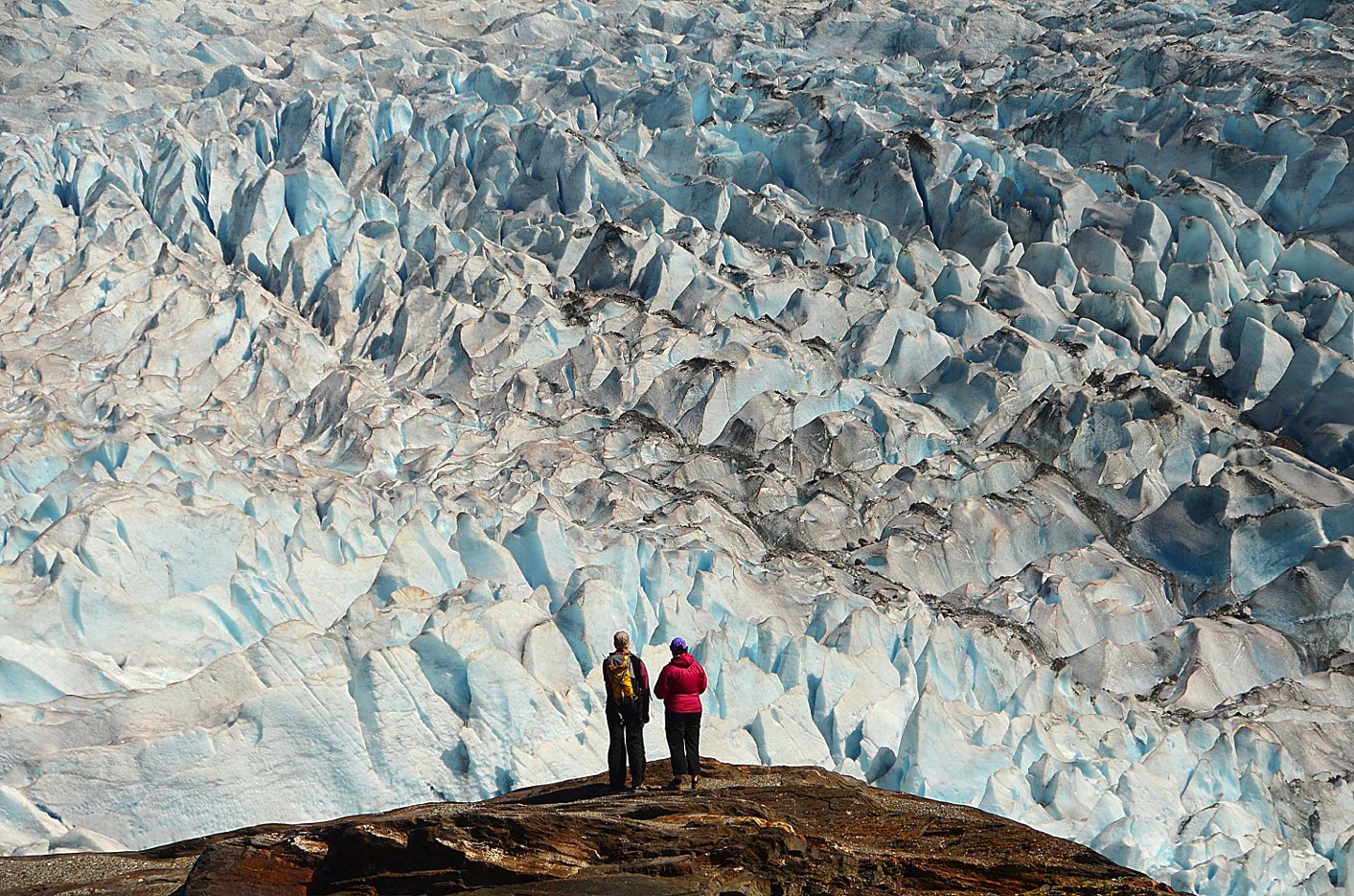 Being a writer is not always about the landscape. Sometimes, the greatest thing about it is the people you meet. How often, for instance, do you get to meet a legend?

I was on assignment for my book TREASURES OF ALASKA, trying to arrange a helicopter to take me up to Camp 10 of the Juneau Icefield Research Project (JIRP) high in the Coast Mountains to meet Dr. Maynard Miller, founder of JIRP and one of the leading glaciologists in the world, one of the first scientists to recognize climate change.

I had been warned off of seeking him out by several people who spoke of his brusqueness and his disdain for “reporters” especially on the ice. But, I was determined to see him “on the ice” and in his element. A sudden break in the weather left me no time to second-guess myself.

We flew in, landing at Camp 10 as if we were aliens from another world. As the gust of wind from the departing helicopter cleared, there he was – silver-hair whipped by the wind, surrounded by a gaggle of geology students, walking stick in hand, staring straight at me. There was a long pause … and then he put his arm around me and said, “Come with us. I was just going to show these young people something special.”

With that, he turned and, even at 79 years of age, outpaced us all up the side of the mountain next to camp until we stood on a ledge of bare rock. That’s where we pick up an excerpt from my book TREASURES OF ALASKA and a chapter called “Fire & Ice”:

“Can anyone tell me what we can learn from the rock we are standing on?” asks Maynard Miller, one of the world’s leading experts on glaciers. He has gathered a group of students on a granite outcrop that juts above the Taku Glacier like a stage. A thousand feet below us is the scattering of buildings known as Camp 10, one of a string of camps used each summer by the Juneau Icefield Research Project (JIRP) founded by Dr. Miller.

At 79, Maynard Miller has spent a lifetime in the mountains. He led the first American ascent of Mount St. Elias in 1946 and served as the chief geologist on the 1963 American Everest Expedition; for more than 50 years Maynard Miller has returned each summer to teach and do research on the Juneau Icefield. In his eyes, the landscape is an open book: stories are written everywhere, including the rock on which we are standing.

“Remember,” he says to the students, repeating one of his favorite axioms, “don’t just look. See.” Silver-haired, eyes flashing, ice axe in hand, and perched on a rock stage high in the mountains, Miller looks almost biblical, all but trembling with his desire for the students to see what he sees all around him.

“Do you mean … the lines?” one timid student offers tentatively, pointing out a set of scratch marks on the rocks beneath our feet. “YES!” Dr. Miller explodes. “Glacial striae!” From just a few scratches on the rocks, he paints a picture of how this rock was overrun twice by glacial ice, which direction it came from at different times and depths. “It’s all here,” he bellows into the wind. “Nature is screaming at us. You just have to learn to understand what it’s showing you.” It was a lesson that neither the students nor I will likely ever forget.

I would spend nearly a week with his team, skiing across glaciers, digging research pits into solid ice, and in spare moments walking quietly with Dr. Miller “on the ice.” Once, at a spot he called “Sunday Point” I shared another miraculous moment with this legendary man. The book records it like this:

“Sitting on a ridge called Sunday Point and watching spotlights of sun illuminating the peaks one at a time, we look out over the unbroken white-on-white of ice more than 4,000 feet thick and see not a single living thing. Hikers and skiers have slipped, just that fast, into unseen cracks and vanished. There are places on this expanse where human voices have never been heard, where the silence is as old as ice. Just as I am thinking this, a hummingbird zooms by; it is as colorful as a chip of a summer rainbow and just as unexpected, vibrating the air around us with its wings. It circles us once, twice, attracted perhaps to our colorful jackets, or just for the sake of company, and then it flies off, vanishing instantly against the immensity of the mountains and leaving us only the silence of the ice.

“When you sit out here on a high ridge,” Dr. Miller says to me as we stand immersed in that timeless silence, “the icefield all around you, something strange happens. You feel both the minuteness of yourself and the shortness of life, but at the same time you have a sense of power as you look out to eternity and the immensity of what is around you.”

That is my last memory of Dr. Miller. I left Camp 10 the next day and went on to other adventures. Dr. Maynard Miller died in 2014 after a lifetime of adventure and science and teaching. He was 93 years old, a man not afraid to bellow at students begging them to pay attention to the world around them. But he was also not afraid to see the beauty and meaning of a flicker of hummingbird wings high on an eternity of ice. He was, to many of us, and always will be, a legend.