Dancing With the Devil 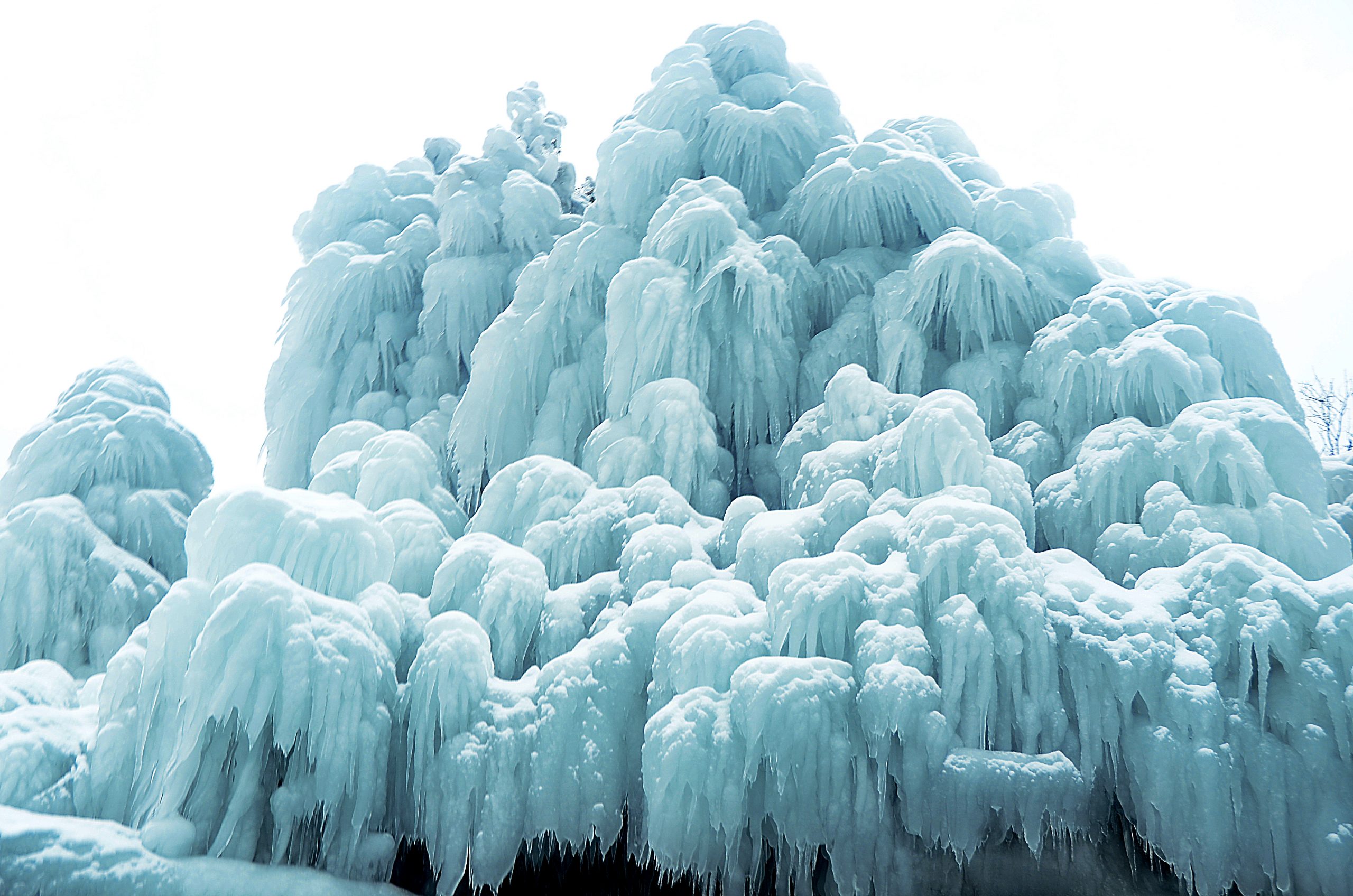 A Photographic Moment: Dancing with the Devil

Let me just say right from the outset here that none of what follows was my idea. But then, I didn’t say “no” either.

January of 2017 in northern Wisconsin had all the teeth of a normal northern winter – storms, wind, bone-chilling cold – but for reasons that only the lake gods know, Lake Superior in the Apostle Islands was still mostly ice free the first week of January, the ink-black water contrasting sharply with the white of winter ice. Of course, all the recreational boats of summer had long since been extracted from the marina, leaving the boat slips looking like row after row of missing teeth. Even the fish tugs were mostly sealed in tight in the grip of winter ice.

Still, if a person could chip a path out of the Blackhawk boat ramp, the rest of the lake was more or less open. If only …

I met Andy Matheus and Mike DeWitt at the Blackhawk land. What is normally a bustling place in summer was as empty as a graveyard this time of year. Andy and Mike had done countless adventures in the Apostles, at all times of year and with many different modes of transportation. They love these island. They know the lake. And, they know their limits. This was on the edge of their limits – the open lake on January 7th.  We all knew it. Still, if we could only …

The first surprise for me was the boat – an open boat, made for summer fishing. This was decidedly not summer. I had figured we’d be using a covered craft, with somewhere to duck out of the slicing winter winds. Nope. The second surprise came when we donned our life jackets and prepared to cast the lines. “Do you want a helmet,” Mike asked, the sound of his voice muffled by his own full-face motorcycle helmet. A helmet? I thought to myself. We have mounds of warm clothing, rubber boots, lifejackets, safety gear, radios. What exactly do we plan to hit that might require the protection of a helmet? I declined.

With just a few pokes with the pole to shove an ice sheet or two aside, we easily maneuvered the boat out of the marina and into the open water and Andy hit the throttle. Instantly, I realized what the helmets were for: not for protection from hitting anything but protection from the open blade of the wind. A good idea, I thought to myself, pulling meekly on the flapping strings of my thin hood in an attempt to cinch it around my face. Good idea.

The passage up the West Channel was quick and smooth – first Basswood and then Hermit Island slipping passed as we huddled in our puffy jackets and our own thoughts – Oak, and Otter, and Bear. Each time I glanced up I couldn’t help but be struck by the surreal nature of what we were doing – skimming along in an open boat on Lake Superior in January. Out beyond the north end of Bear, Andy throttled back. We were about to leave the lee and, when we did, we would enter the most exposed crossing of the trip if we hoped to get to Devils, the northern most of the Apostles and the most exposed to winter storms. “Everybody comfortable with this?” Andy asked as we bobbed in the black water. There would be no other boats around to render assistance if anything went wrong. No chance of Coast Guard help. I don’t remember any of us saying a word, just nodding heads and a mutual understanding of risks. The boat throttled up and we hunkered down for the crossing.

The next time I glanced up, my perception of these islands and my view of nature would change forever.  Like Andy and Mike, I’d seen these islands in a lot of moods – storms and fog and rainbows and wind. I’ve seen northern lights flicker over Honeymoon Rock and watched the silhouetted hulls of shipwrecks pass silently below in Julian Bay. I’ve listened to the spring peepers on Basswood Island bogs so loud on late April evenings that it was like the earth was singing and heard the rhythmic rustle of autumn leaves rattle with every step of an October hike across the spine of Oak Island. I’d even seen the mainland sea caves tinseled with icicles like some exotic jewelry. But what I saw when we rounded the north end of Devils Island in January was nature apart, something else entirely.

“This was Earth made out of Chaos and Old Night,” wrote Henry David Thoreau of a similar encounter with the rawness of nature on Mount Katahdin. “Man was not to be associated with it. It was Matter, vast, terrific–not his Mother Earth that we have heard of, not for him to tread on, or be buried in.”

Red rocks fanged with silver-blue ice. Dark waves lashing the jagged shorelines. The softness of Lake Superior on a sweet summer night was gone. There were no “singing sands” to walk barefoot in, no shimmer of green leaves on shoreline trees. This was nature raw and jagged.

Mike and I stepped off onto the icy rocks with our cameras while Andy stayed with the boat just off shore. We walked and climbed and photographed in awed silence, as if we were in a cathedral, a cathedral of winter where even to speak would be to risk bringing down the wrath of winter spirits. Cliff faces stood festooned with ice. Wind-sculpted trees rimed with spray and ice were twisted into grotesque sculptures like silent screams. Angels wings of frost brought to mind the hovering, pitying spirits in William Blake poems.

Too often perhaps in our minds, our national parks are places of postcard scenery. We seek them out in their best light, the perfect season, the perfect sunset, the peak of wildflowers or fall colors, and then go home with our memories of moments collected like stamps. But when we do that, I think, we miss something important about nature. These islands, I came to realize aren’t just sunsets and wildflowers and summer days. They are wind and rock and ice and darkness just as much as sun-warmed beaches. It was all there, written in wind-scrolled ice, in a January day on Devils Island far out on the blue-black back of Lake Superior.

We stayed until the light turned, a slightly deeper cast of gray on the short winter day, and then boated back to the Blackhawk dock each of us wrapped in our own silence. Stepping onto the dock again, feet once again firmly on mainland rock, we were giddy, not quite sure how to act or what to say. It felt as though we had just returned from another planet. And, in some ways I think we had. I’ve traveled to many places, seen many types of landscapes from Alaskan volcanoes to Antarctic reaches but nowhere in all of those travels have I come so clearly face-to-face with the ice-sculpted reality of nature, in all its beauty and rawness. We had taken some risks, made some mistakes but dealt with the consequences to lessen the danger. We had seen something few people ever see – the outer ring of the Apostle Islands by open water in January. We had come face-to-face with true nature – the nature of these islands and our own. And we came back changed. These island, no matter what the season, will never be the same to me. Next time however, if there ever is one, I think I’ll say “yes” to the offer of a helmet.