On Assignment: And The Sky Danced 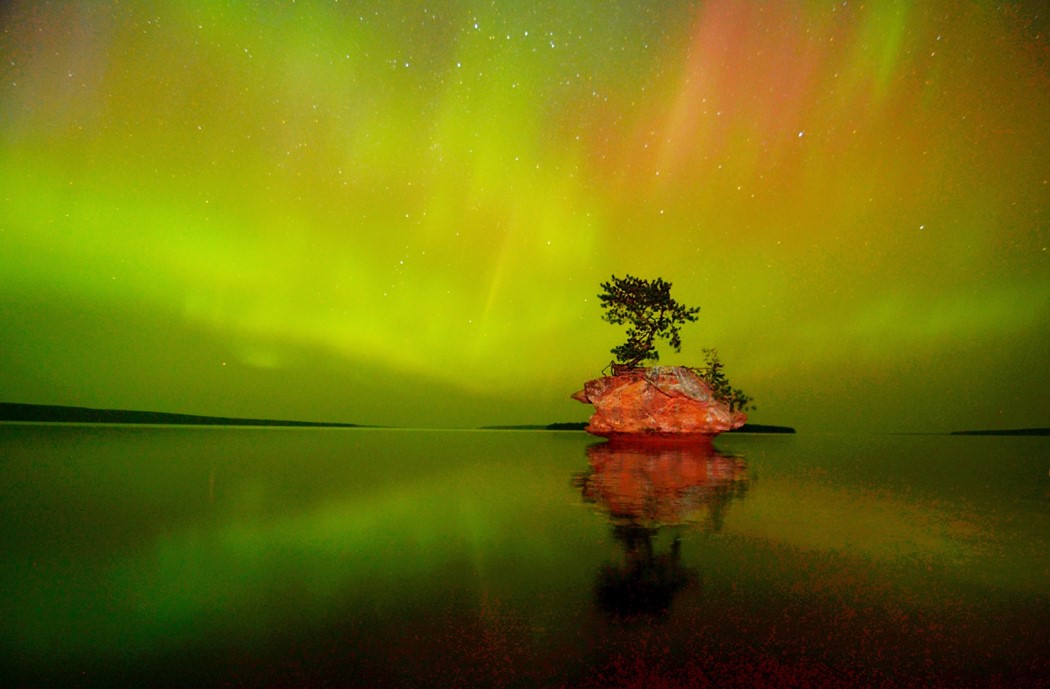 CRACK! I am bolt upright in my sleeping back even before the noise stops, yanked awake by a sound like the crust of the earth giving way. Alone, camped just off the northern shore of Basswood Island, twenty below zero, it is February, and the ice is cracking. Immense sheets still several feet thick and safe to camp on, Lake Superior will boom and groan all night restless in this deep cold, meaning little chance for sleep. I unzip the tent to look around.

That’s when I see it – curtains of green-tinged light, spikes of orange like flames: the northern lights. Above me, clear and bright, so close it seems as if I can reach out and stir the colors with the tips of my fingers, the sky is dancing. I slip into my boots, crawl out of the tent, and begin to walk out on to the back of the groaning lake.

Beyond Honeymoon Rock, the skies open even further. The aurora flickers to every horizon, above and below, reflecting on the ice in places the wind has cleared the lake of snow. The light overhead dancing in unison with its reflection on the ice. It is, I think to myself alone on the ice surrounded by light, like being inside of a diamond.

To witness the northern lights is to stare into the realm of wonder – eyes wide, neck bent like a bow. Sure, there are scientific explanations enough – solar storms, sunspot activity, reactions with the earth’s atmosphere and electromagnetic field – but even with all the computer modeling and satellite communications, we still cannot accurately predict the aurora. There is, it seems, still a place in the world for mystery.

Surrounded by light, I remember Sigurd Olson’s description of skating on a lake under the northern lights, gliding “through a sea of changing color caught between the streamers above and below.” I try a few sliding steps but then stop and lie back flat on the ice staring up at the lights. “At that moment I was part of the aurora,” Olson wrote, “part of its light, and of the great curtain that trembled above me.” Alone, far off of Basswood Island on the ice, I lie on my back peering straight up into a miracle until I tremble too – whether from the cold or from the sheer, sublime beauty of the sky dancing above me, I can’t exactly say.